•Tell sth/sb apart (from another) (phrasal verb) – To distinguish; to perceive something or someone as being different or distinct from another.

1.I couldn't tell apart the real $20 banknote from the counterfeit one.

2.The twins were identical, and we couldn't tell them apart.

•Right a/the wrong (idiom) - To do something to prevent a bad situation from continuing.（撥亂反正，糾正錯誤）

1.Most problems arise from neglect and, since repairs involve skilled labour, righting a wrong can be expensive.

2.He seems to think he can right all the wrongs of the world.

•Pass sb/sth off as sth/sb else (phrasal ver) - To make people think that someone or something is somebody or something else.（冒充，假扮）

1.They bought up pieces of old furniture and passed them off as valuable antiques.

2.He passed himself off as a doctor.

•Besiege (verb) - When someone is besieged, a lot of people surround them.（包圍）

1.When the pop star tried to leave her hotel, she was besieged by waiting journalists and fans.

2.A shop owner was besieged by job applications.

•Way out (idiom) - The means by which a predicament, dilemma, etc., may be solved; a way of dealing with a problem.（（脫離困境的）出路，（解決問題的）方法）

1.The best way out of a difficulty is through it.

2.There must be a way out of this mess. 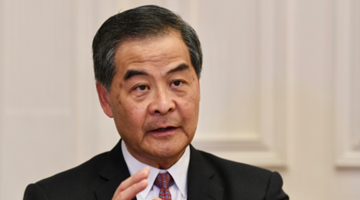